Bitcoin Hits $11.6K for First Time in a Year as Traders Expect $15K

The price of Bitcoin (BTC) has surpassed $11,600 for the first time in 12 months buoyed by rising market sentiment. As BTC/USD demonstrates strong momentum, investors believe there is little resistance until $15,000.

Bitcoin rose to as high as $11,763 on BitMEX in a sudden weekend price move. It also “filled” the CME futures gap at around $11,630, which typically does not happen during the weekend.

Meanwhile, Kyle Davis, the co-founder of Three Arrows Capital, suggests that the weekend price action has not even started. He notes that there is less resistance between $12,000 and $15,000. Davis said:

“What’s crazy is the weekend move hasn’t even started yet.  How much resistance is there at $12-15k?” 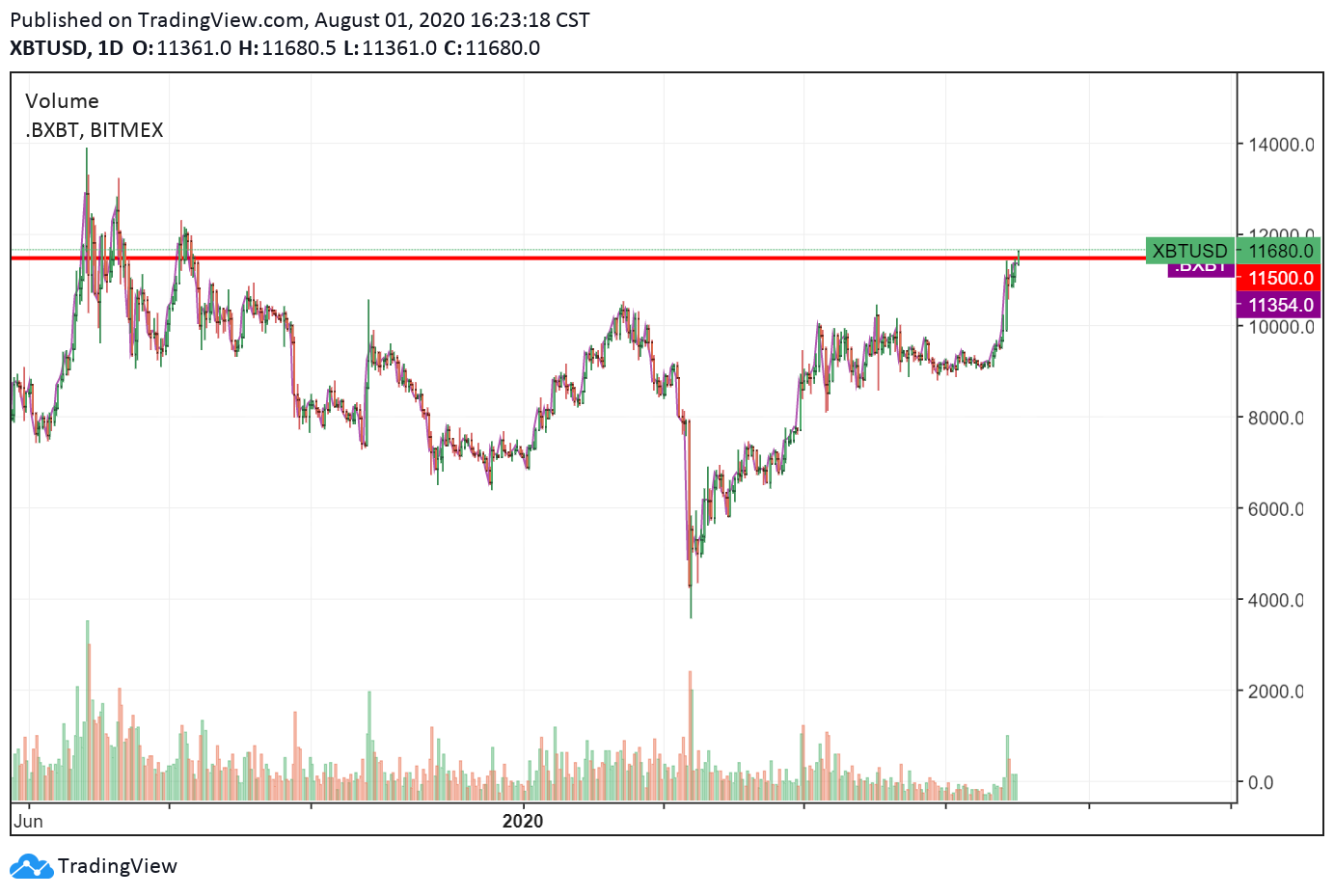 The daily chart of Bitcoin with a major resistance level. Source: TradingView.com

Also worth noting is that the price of Bitcoin soared to an all-time high in 2017 within two weeks after hitting $11,600.

According to Michael van de Poppe, the market structure of Bitcoin would remain compelling if it holds $11,400. Stability above the $11,400 level would show that it has turned into a support level. Van de Poppe said:

What’s behind the Bitcoin rally?

At the same time, data from Skew shows less than $20 million worth of futures contracts were liquidated on this Bitcoin uptick. When the BTC price movement is driven by the futures market, it often leads to heightened levels of liquidations.

The lackluster amount of liquidations in the futures market suggests that it is likely the spot and options market catalyzing the rally. If the Bitcoin futures market is less heated, it leads to a more stable and fundamentally strong bull cycle, which some prominent analysts argue is now starting.

At a higher time frame, a pseudonymous trader known as “Rookie” said the monthly candles of Bitcoin and Ethereum mark a bullish trend. The confluence of a favorable macro market structure and a neutral futures market could maintain BTC’s momentum. The trader said:

“Both BTC and ETH monthly candles have essentially closed at their highest points of the month. NO upper wick. This is bullish.”

In the near-term, the biggest obstacle of Bitcoin is whether it can defend the major $11,400 level as a support area. Traders generally remain positive as BTC begins to break out and outperform alternative cryptocurrencies.