Bitcoin Futures Traders Bet on Bullish Price Action, but Not Too Fast

Bitcoin (BTC) futures trading has been on a high since July 21 with both the Chicago Mercantile Exchange and Bakkt seeing sizeable increases in volume and open interest for their contracts. This resurgence in BTC futures comes as the spot market value of the largest crypto by market capitalization reached a new 2020 high.

Two months on from the May 2020 halving event, BTC has begun to show signs of the anticipated bullish advance. Bitcoin usually sets a new all-time high in the year following a block reward subsidy decrease, with BTC optimists stating the trend will continue.

Amid the current positive price action for Bitcoin, bullish sentiment appears to be gathering steam in the BTC futures market. Long positions currently outnumber shorts by almost 9-to-1, which means that any significant downward retracement could see a cascade of liquidations on optimistic bets, especially for traders with overleveraged longs. Back in mid-March 2020, the market panic caused by the COVID-19 pandemic saw Bitcoin fall to $3,800. This drop caused a cascade of forced liquidations, especially on derivatives exchanges like BitMEX.

The price surge for BTC comes amid a raft of positive news for the crypto space with the United States Office of the Comptroller of the Currency allowing national banks to offer cryptocurrency custody services. Major economies have also been moving toward stimulus packages to alleviate the disruptions occasioned by the ongoing coronavirus pandemic. EU leaders have already approved a $2-trillion spending plan with almost half of the earmarked sum geared to support economies hardest-hit by COVID-19. In the U.S., lawmakers have been working on another round of stimulus payments, which could go as high as $3 trillion.

With the U.S. Federal Reserve printing more money in one month than in the last 200 years, investors appear to be keen on hedging against the attendant risk of currency debasement. This sentiment appears to be providing significant tailwinds for haven assets like BTC and gold. Bitcoin’s rise to a new 2020 high also coincided with gold setting a new price record per ounce. Indeed, the precious metal is close to crossing the $2,000 landmark, with silver also at its highest level in over seven years. 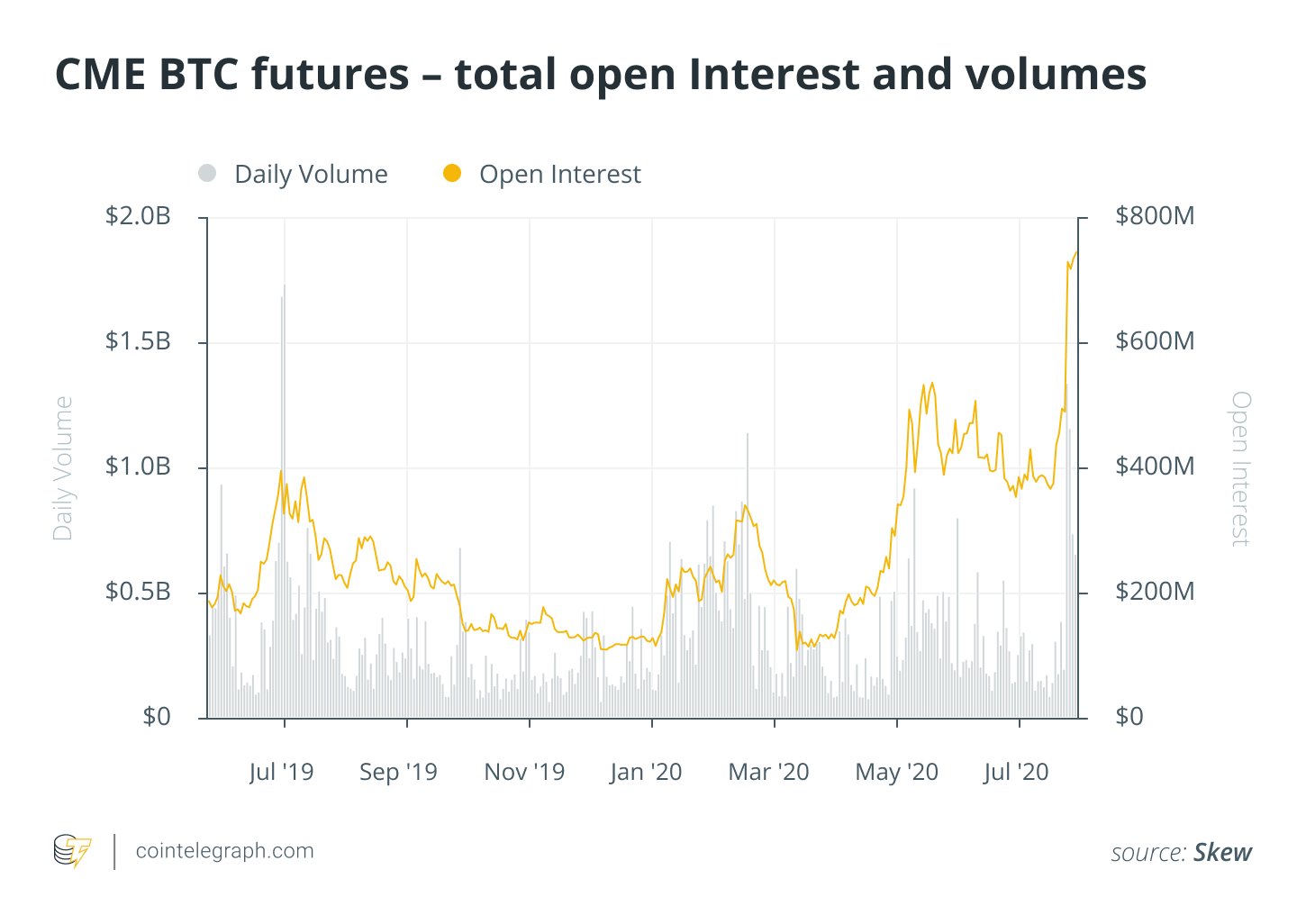 A week after “Black Thursday,” CME Bitcoin futures open interest almost fell to their lowest level in three months. However, as spot price recovered in the weeks that followed, so too did the open interest in CME’s cash-settled BTC futures contract until the May halving. With the block reward subsidy event not triggering any immediate price gains, OI took a significant dip once again. At the time, retail crypto derivatives traders suffered liquidations to the tune of about $1.3 billion, as the BTC price saw a retrace from $10,000 to the $8,600 support level.

It is perhaps interesting to note that while OI is on the rise, trading volume has cooled off significantly over the last few days of July. The same trend can be observed for Bakkt, with open interest at an all-time high of $22 million, but trading volume has been on a downward slide for both its cash and physically settled futures contracts.

Indeed, the rising OI in Bitcoin futures is representative of the trend seen in the crypto derivatives arena as a whole. According to its Q2 2020 report, market analytics platform TokenInsight revealed that marketwide cryptocurrency derivatives OI rose from $2.62 billion to $5.53 billion in the second quarter of 2020. Typically, high OI and low volume point toward more exposure-driven activity than actual trading. Often, this scenario indicates that traders are looking to short Bitcoin’s price.

However, according to data from on-chain analytics platform Datamish.com, the ratio of percent longs to short is almost at its highest level in 2020. This trend suggests that traders expect that Bitcoin still has room for more upside. Joe DiPasquale, the CEO of crypto hedge fund BitBull Capital, told Cointelegraph that the high OI points toward traders expecting an impending uptick in volatility:

“At this time, Bitcoin is at a critical level. If it holds above $11,000 for a week or so, we can expect further appreciation. However, it will only be around $15K that we can expect actual retail FOMO and the possibility of a parabolic advance.”

For Adam Todd, the CEO of crypto derivatives exchange Digitex Futures, the rising OI means more money flowing into the Bitcoin futures market. In a conversation with Cointelegraph, Todd stated: “Generally, a rise in open interest means that the price will also rise as new money comes into the market.” Rising open interest amid declining volume also points to traders electing to adopt longer holding periods. With Bitcoin price volatility dropping to all-time lows before this current surge, short-term funds would have become unprofitable. 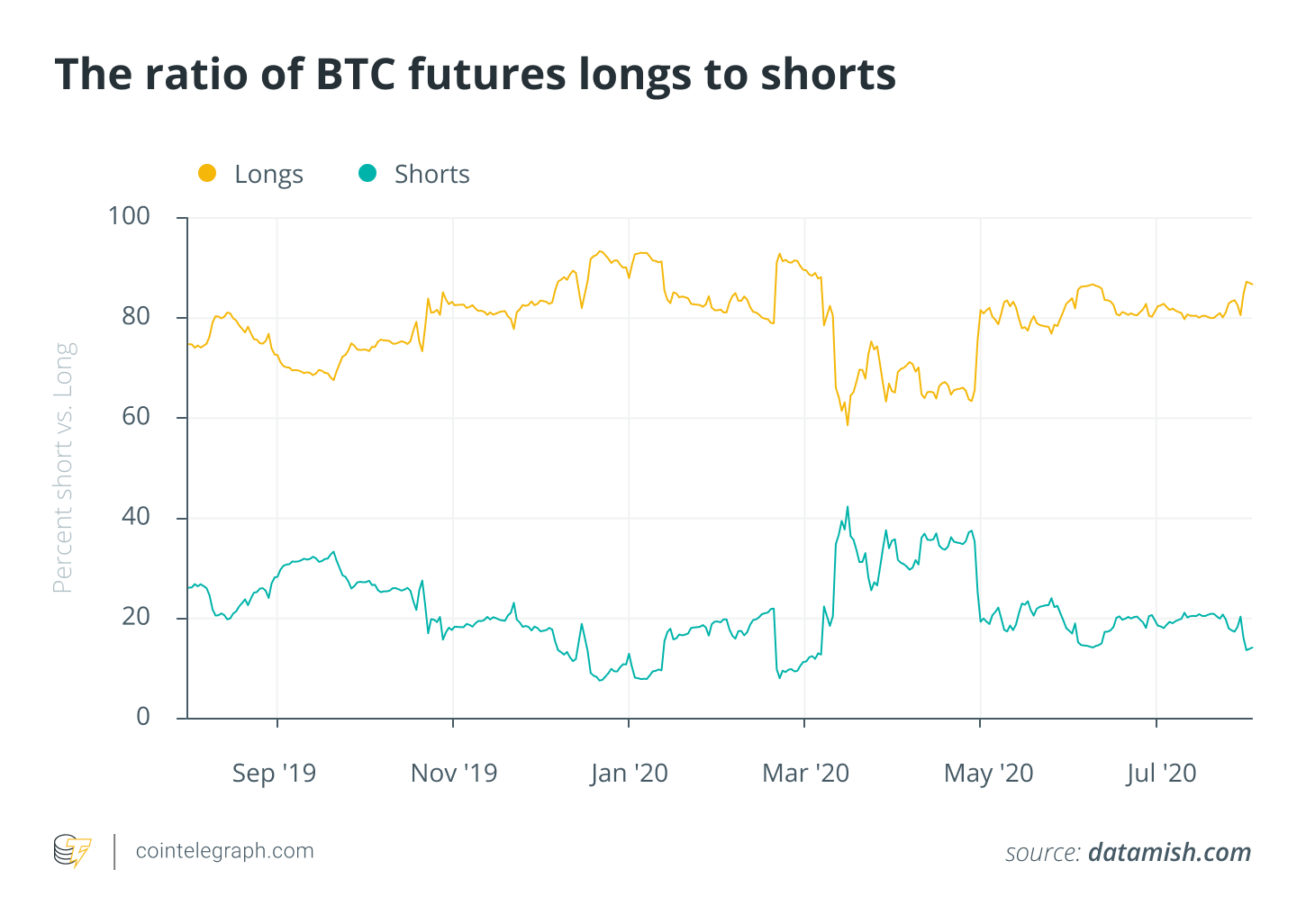 Crypto derivatives trading in numbers: First half of 2020

The rising OI for CME and Bakkt is one of the many indications of increasing institutional activity in Bitcoin and crypto in general. Grayscale, the largest cryptocurrency hedge fund, has recently seen its total assets under management top the $5-billion mark.

Indeed, Grayscale’s AUM grew by about $500 million in barely a week to add to the over $1.4-billion surge recorded in the first half of 2020. While the Grayscale Bitcoin Trust is still the overwhelmingly dominant product in the company’s catalog, Litecoin (LTC) shares have grown over the past month, which indicates some institutional appetite for the seventh-largest crypto by market capitalization. The surge in Litecoin share ownership coincided with LTC keeping up with Bitcoin’s price gains even as other altcoins saw red. Commenting on the prospects of greater institutional involvement in Bitcoin, Todd remarked:

“I think that Bitcoin’s recent breakout, especially at a time when traditional markets are so uncertain, will certainly cause more institutional investors to take a second, third or even fourth look at adding BTC to their portfolios. However, institutions will likely wait for a price correction, unlike retail investors they are not going to chase a rally.”

Apart from futures, the OI for Bitcoin options has also seen a similar increase. Of the $2.2 billion in total open interest for BTC options, Deribit accounts for $1.79 billion, which amounts to an 80% dominance of the market. Again, as is the case with the futures arena, the rising OI for BTC options is happening alongside a decline in trading volume. Apart from dominating the Bitcoin options OI, Deribit also controls over 90% of the market’s trading volume, up from the 60% dominance achieved in Q2 2020.

Data from Skew shows the Bitcoin options put/call ratio, or PCR, is beginning to climb steadily. A rising PCR typically indicates bullish sentiments, and at 0.63, traders appear to be expecting more upside for BTC. However, when PCR begins to approach the 1.0 mark, a contrarian interpretation usually forms for the indicator, as high PCR values usually front-run the emergence of bearish sentiments as seen in May before the halving event. Leading up to the 2020 halving, the Bitcoin options PCR rose to 0.81, its highest level in 2020. A few days later, BTC experienced a retrace from $10,000 to the $8,600 price level. 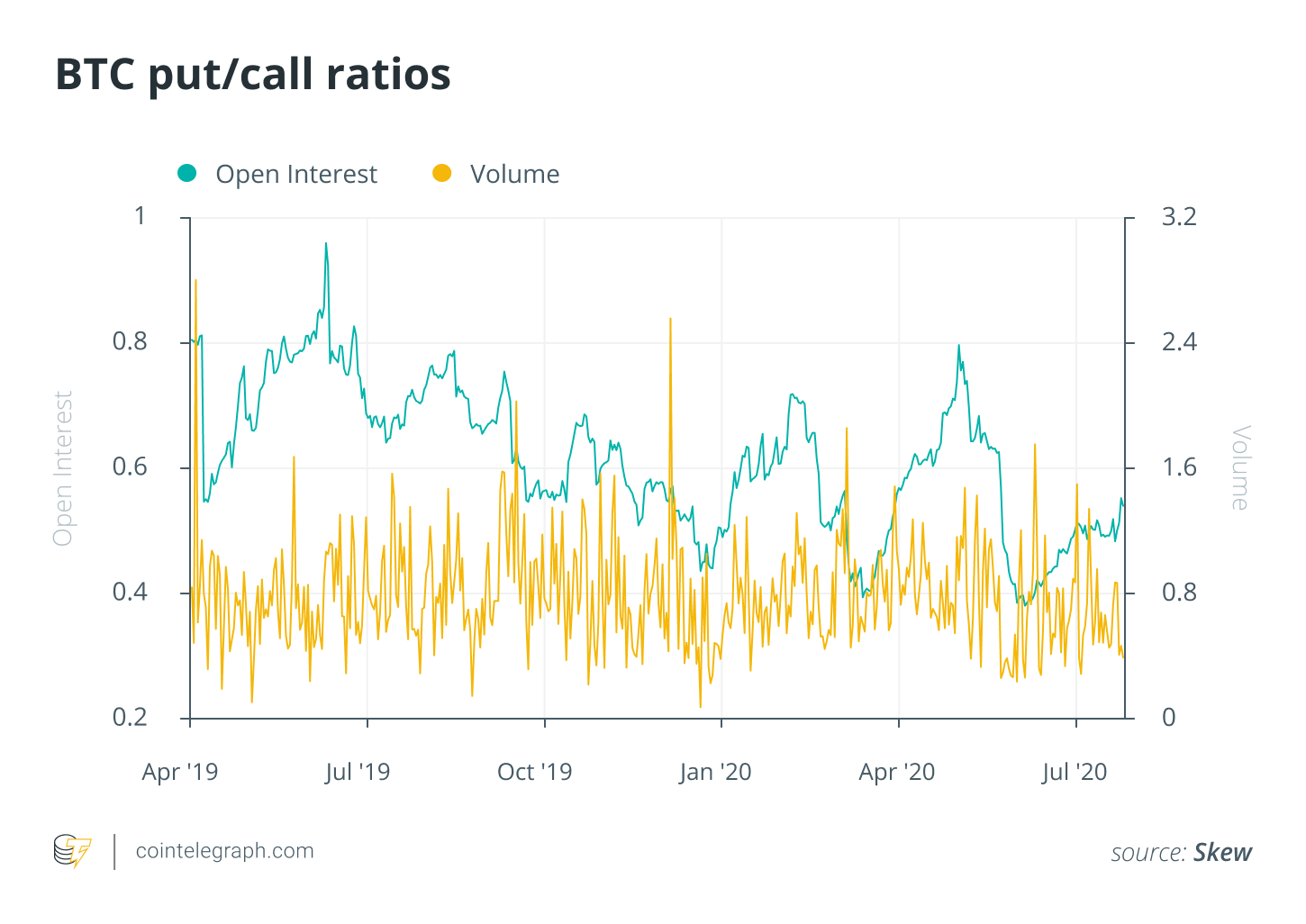 A similar situation occurred the last time the BTC options PCR nearly reached 1.0, which was in late June 2019. Bitcoin went on a downward slide for the second half of 2019, ending the year at $7,300. If the trend holds, then the current upward price action could be interrupted by a significant pullback. According to DiPasquale, such a retrace is to be expected:

“Nearly all quick surges are followed by pullbacks, which are healthy for market action since profit-taking allows investors/traders to take breaks, and new capital can enter the market as floors are established. At the moment, the zone between $10,000 and $10,500 presents a solid support zone for any pullbacks.”

The 106,000 BTC (~$1.2 billion) in Bitcoin futures and options that expired on July 31 might also have some impact on the price action in Q3 2020. For Bitcoin options, over $1.4 billion in aggregate open interest is still available to trade in August and September.

With $2.159 trillion in volume, crypto derivatives accounted for about 27.4% of the total cryptocurrency trading market, as reported by TokenInsight. Despite the lull in price action for about half of the period, the crypto derivatives niche still saw a marginal increase while spot volume fell 18%.